Reflections on the uncanny natures of digital projections

How many things the night recalls, and how we weep for them though they never were! Fernando Pessoa, The Book of Disquiet.

The nights are playing their tricks on us.

This Nuit Blanche concept is not new: in recent years, the success of Paris’ Nuit Blanche, which began in 2002, has inspired a pan-European event called “Nuits Blanches Europe” involving night festivals across cities like Brussels, Rome, Madrid and Bucarest. The Son Et Lumiere concept, credited to Paul Robert-Houdin, was a form of nighttime entertainment usually presented in an outdoor venue of historic significance and first held at the Château de Chambord in France in 1952.

This night-time immersion of the arts has been hosted in more than 120 cities around the world including Brussels in Belgium, New York in the US and Amsterdam in the Netherlands. One of the most popular ‘Nuit Blanche’ celebrations around the world with tourists and residents in early March is in Montréal, Canada. It antes up some 180 mostly free indoor and outdoor activities including installations, exhibitions, live performances and screenings that light up the night in the city. The cities exchange experiences, projects and artists and new cities become candidates each year.

Spectacular in their scale and dazzling in their brightness, artists, lighting engineers, and audio-visual mavericks design these installations by using the surfaces of built spaces to sculpt visual masterpieces of light, form and colour. Their tricks of illumination exploit technical tools – 3D architectural mapping, sensors, software-enabled visual distortions, real-time image manipulation of the ever growing, luminous flux of data – to introduce into public spaces a sense of the ‘technological uncanny’ (1), a phantasmagorical urban world in which anything, seemingly, is possible (2).

To see the image of a woman splayed out over the sails of the Sydney Opera House, her hands reaching out towards the harbour, or the surfaces of a warehouse building peeled back to reveal a forest beneath, is to see the familiar transformed into the strange, the impossible revealed as if it might really be true.

For creators of projection artworks, the topography of the built environment becomes a material to incorporate into the programming and design of urban interfaces(3). Digitally-projected, luminous information is in this way mixed with the ‘data’ of material spaces – it’s the disjunctures between the two that can be exploited to provoke the greatest of surprises. We think we are seeing a wall, but suddenly we are seeing a forest. Architectural dreams become hyper-real surfaces.

Such is the dynamic nature of projection art today – and, indeed, the size of the commissioning budgets attached to them – that we can now see unfolding a proliferation of genres and approaches to working with light and data in public space. I’ve started to think about how we might begin to frame these approaches (early stage thoughts, please bear with me).

In City Life, Sydney-based projection agency Electric Canvas transformed a historic customs house into a living, breathing community of city workers. Here, the digital agency edia architects use digital projection to reveal complex interactions existing, real-time, within localized audiences, making use of harvested information gleaned from mobile devices and other sensors, thus illuminating patterns of mobility, complexity, and flux. Technically, the piece mixed high power digital projectors with use of large-format “PIGI” projectors, filling the walls of the building with spectacular, bedazzling colour and light. Everybody will look up in wonder.

Projection mapping is fundamental to most projection artwork, playing with the sense of uncanny produced by remapping the dimensions of a building and then layering it with completely different visual animations and effects. The field is vast and diverse, the aesthetics sometimes, dare I say, dubious, driven by a shock and awe mentality at times.

Here is a recent event in Maastricht, the Netherlands, which did explore a temporal dimension to projection mapping in a historically sensitive way. Vrijthof, one of the best known squares in Maastricht, was lit up for one week in November 2013, from 13 to 20 November, featuring a 20 minute ‘show’ projected onto the facade of the ‘Hoofdwacht’, a military guardhouse with a history dating back to the 17th century. Here was an impressive 3D mapping projection that offered audiences an overview of the turbulent history of the city.

During recent years I’ve become more and more involved in projection-based artworks, which reflects partly the growing demand for this genre of work, whether from local councils, universities, urban developer clients and public art commissions. Working with Michael Killalea through Esem Projects, this practice has been continually evolving to incorporate different ways of working with communities, their stories, local historical collections in projection-based outcomes.

There are multiple layers to this work. In the first instance, each projection project is knitted closely with stories of place: who has lived here, what has changed, where are the strongest attachments and how are these expressed, what has been documented? Why is this project being funded, and what role is it to play in connecting with a community or audience? Each of these questions shape the given response to a commission.

Here, for example, is our work ‘Eyes on the Street’, projected onto the United Services Club on Watt St in Newcastle nightly from June 2013 to April 2014.

The film loop incorporates visual recordings and documentation of Watt St from its earliest European habitation. It is deliberately confined to the acts of documentation, and the ways in which these are co-opted to represent the ‘image of a city’ to a wider audience.

For the work of Esem Projects, digital projection allows for a different kind of engagement with digital collections and archives, enabling some playful interventions (and sometimes difficult negotiations) in the spaces of the city.

The public canvas allows for a recorded archeology of a collection to be surfaced back into the present day in a more spectacular fashion.

We bring community contributions to this practice, allowing members of a community to see their own memory pieces writ large. By doing this, new communities are in turn forged.

Working with the site of the former Hotel Australia for the Last Drinks project for Art & About in 2012, we spent an evening with community contributors from across Sydney, who all had known the way the precinct used to be, but would have no cause to ‘visit’ the historical site now, because all is dust.

Reinscribing documentation of the past back into the present is to work with the possibilities of temporal layering, in situ, and of ‘creating’ historical sites once edited out of the modern city.

In this image below, a man is seen closing the curtains of his window at University House, ANU. The man was filmed in 1956. The footage is being projected onto University House in 2013. 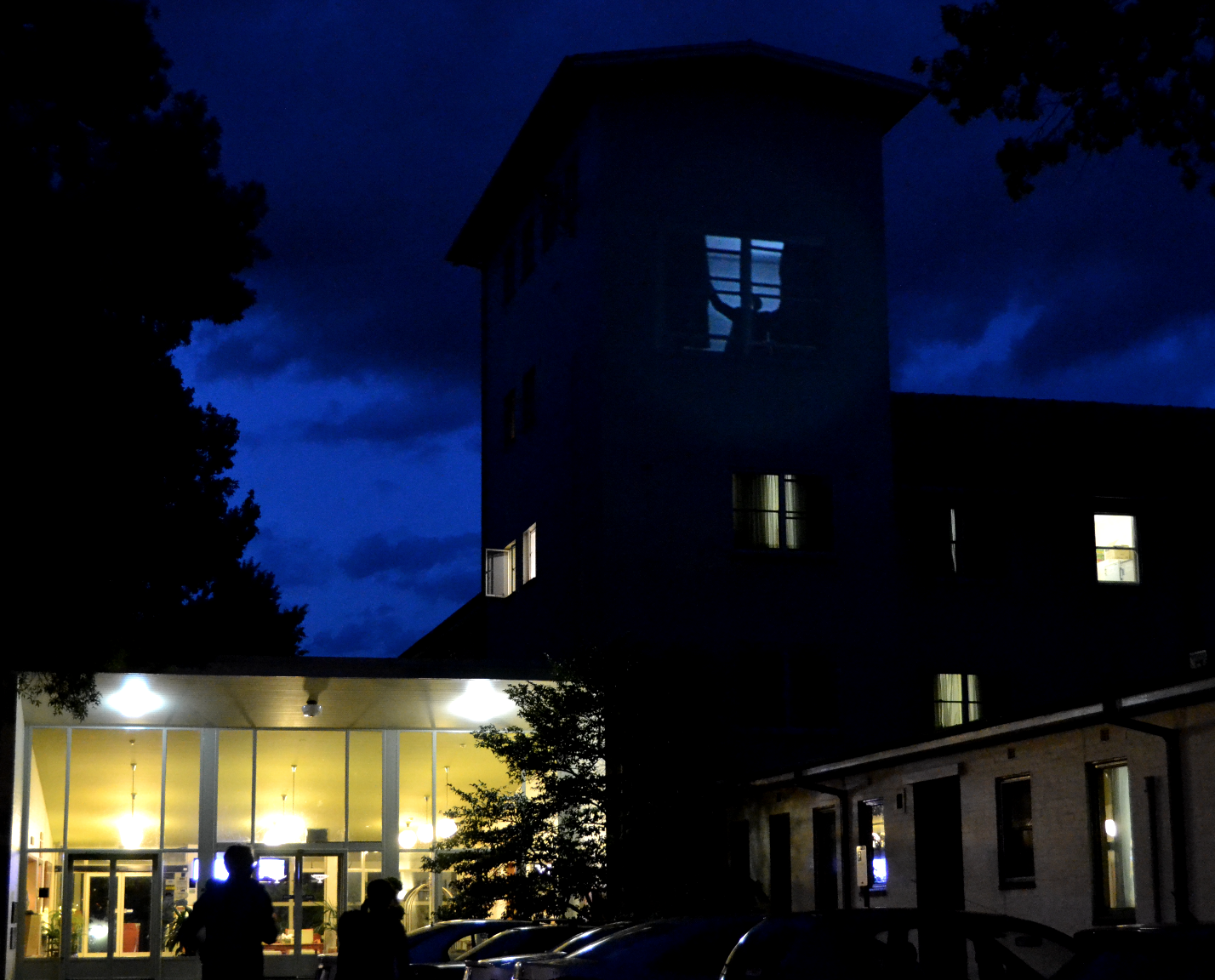 This is not technically complex, but I do believe it has a role to play in extending the possibilities of projection artworks in public spaces. There is both the selection of site, and the location of documentary footage, that underpins the affect of such a work which, while not technically difficult to achieve, does rely on fairly extensive research, quite some chance, and ready access to the site. But such playful layering of past and present spaces can be used not just fancifully, but also to more political ends.

The ‘Latent Souls’ project, for example, arose from a series of smaller activities by the “Niño Viejo” (“Old Child”) Collective in Valencia. The artists state: “Our aim was to use the city as an audiovisual format to express various proposals which criticise urban development in the city. Small, playful actions which interfered with the urban space and aimed to alter it, were sarcastic about it and transgressed it, thereby offering a critical and personal vision of ‘public space’.

“Box” was released by Bot & Dolly in September 2013 and seemed to reset the boundaries of projection mapping for the next little while at least, incorporating never-before-seen robot-powered projection mapping on moving objects. “Box”, launched to widespread acclaim, resulted in the synthesis of real and digital space made all the more alive through the sense of fluidity and movement, of machines, of man, and of movable objects (er, a box), the culmination of multiple technologies, including large scale robotics, projection mapping, and software engineering.

As said by the makers: “We believe this methodology has tremendous potential to radically transform theatrical presentations, and define new genres of expression”.

And then, there is Little Boxes, by artist Bego Santiago. This is perhaps my most favourite piece of all, with its playful use of scale and movement, and its dedication to a timeless, iconic song, that puts us all in our places.

This piece was written while Sarah was a post-doctoral fellow at the Institute for Culture and Society, Western Sydney University.

Keep up to date by signing up to our newsletter